END_OF_DOCUMENT_TOKEN_TO_BE_REPLACED

Mechanistic models with high spatial resolution are useful tools to represent the dynamic and non-linear feedbacks between tides, winds and freshwater inflows in the nearshore and to predict future conditions. In this thesis, several aspects of the wind-and river-plume-driven hydrodynamics and transport in estuarine systems are examined through barotropic and baroclinic models.

The study begins with an application of a state-of-the-art storm surge model to examine the effects of meteorological forecast errors on coastal flooding predictions along the North Carolina (NC) coastline. As Hurricane Arthur (2014) moved over Pamlico Sound, it increased the total water levels to 2.5 m above sea level; this water pushed first into the river estuaries and against the inner banks, and then moved eastward to threaten the sound-side of the barrier islands. It is hypothesized that a combination of storm track and intensity errors caused errors in the forecast winds and water levels along the NC coast during Arthur. Model results reveal that, as the forecast storm track and intensity errors increase, the errors in forecast wind speeds also increase, but the errors in forecast water levels remain relatively the same, signifying the non-linear response of the coastal ocean to wind effects. By separating the forecast errors in storm track and storm strength, this study quantifies their effects on the coastal ocean, which provides useful guidance for designing relevant forecast ensembles.

In addition to flooding impacts, storms can also cause dramatic changes in estuarine salinities, which can negatively impact estuarine ecosystems. Baroclinic models are useful tools for predicting estuarine salinity response under changing environmental conditions. In the present work, the features of wind- and plume-driven circulation in the vicinity of Choctawhatchee Bay (CB) and Destin Inlet, Florida, are analyzed with a recently-enhanced, three-dimensional, baroclinic model. Satellite imagery showed a visible brackish surface plume at Destin during low tide. The goal of the present study is to quantify variability in the plume signature due to changes in tidal and wind forcing. Modeled tides, salinities and plume signature are validated against in-situ observations and satellite imagery and then applied to analyze plume response in two scenarios. In the first case, model plume behavior is analyzed on successive days of near-constant tidal amplitudes and changing wind directions due to passing cold fronts. In the second case, plume response is investigated during consecutive days of neap-spring variability in the tides and near-constant wind speeds. Model results reveal a larger plume during spring tides and periods of weak wind forcing. Oshore winds enhance the north-south expansion of the plume, whereas onshore winds restrict the plume to the coastline.

Finally, the validated model is applied to identify salinity and transport characteristics within CB. Based on past studies, it is hypothesized that CB is a stratified system with limited flushing and zones of distinct salinity gradients. These hypotheses are tested by analyzing bay salinities from the validated model during a period of low river flows. Model surface salinities indicate brackish conditions (20 psu) throughout the bay except for near the river mouth. Stratification (10 to 15 psu) within the bay is unaffected by the passage of cold fronts and neap-spring tidal variability. The residence time within the Choctawhatchee Bay, an important indicator of estuarine health, is computed via particle tracking and is equal to roughly 40 days.

This work advances the scientific understanding of multiple aspects of estuarine circulation including wind-driven surge and flooding, brackish plume behavior through inlets and onto the shelf, and salinity transport and stratication properties within estuaries. Research ndings lead to a better understanding of estuarine response under a wide range of atmospheric conditions, and the resulting technologies will be useful for oil spill response operations, fisheries and pollution management.

Storm surge prediction models rely on an accurate representation of the wind conditions. In this paper, we examine the sensitivity of surge predictions to forecast uncertainties in the track and strength of a storm (storm strength is quantified by the power dissipation of the associated wind field). This analysis is performed using Hurricane Arthur (2014), a Category 2 hurricane, which made landfall along the North Carolina (NC) coast in early July 2014. Hindcast simulations of a coupled hydrodynamic-wave model are performed on a large unstructured mesh to analyze the surge impact of Arthur along the NC coastline. The effects of Arthur are best represented by a post-storm data assimilated wind product with parametric vortex winds providing a close approximation. Surge predictions driven by forecast advisories issued by the National Hurricane Center (NHC) during Arthur are analyzed. The storm track predictions from the NHC improve over time. However, successive advisories predict an unrealistic increase in the storm’s strength. Due to these forecast errors, the global root mean square errors of the predicted wind speeds and water levels increase as the storm approaches landfall. The relative impacts of the track and strength errors on the surge predictions are assessed by replacing forecast storm parameters with the best known post-storm information about Arthur. In a “constant track” analysis, Arthur’s post storm determined track is used in place of the track predictions of the different advisories but each advisory retains its size and intensity predictions. In a “constant storm strength” analysis, forecast wind and pressure parameters are replaced by corresponding parameters extracted from the post storm analysis while each advisory retains its forecast storm track. We observe a strong correlation between the forecast errors and the wind speed predictions. However, the correlation between these errors and the forecast water levels is weak signifying a non-linear response of the shallow coastal waters to meteorological forcing.

JC Dietrich, R Cyriac, A Thomas, A Gharagozlou, N Tull. “How Can We Speed Up Our Coastal Flooding Models?” NSF Workshop on the Future of Coastal and Estuarine Modeling, Raleigh, North Carolina, 18-21 June 2018.

Computer models can make surge predictions based on limited information about storm characteristics such as track, size, maximum wind speed and central pressure. Those parameters are used to predict the surface pressures and wind speeds throughout a coastal region. Those atmospheric conditions are then used to predict how the ocean will respond by generating large waves and surge, and by flooding into low-lying areas.

Given all the variables involved, there’s a lot of room for error in storm wind and surge prediction modeling.

For our study, we wanted to know how forecasting errors affect subsequent coastal flooding predictions. To that end, we needed to answer a couple of questions: First, as a storm moves closer to the coast, how accurate are forecasts of certain storm parameters like track, size, and maximum wind speed? Second, how do those forecasts affect predictions of wind speeds and storm surge?

END_OF_DOCUMENT_TOKEN_TO_BE_REPLACED 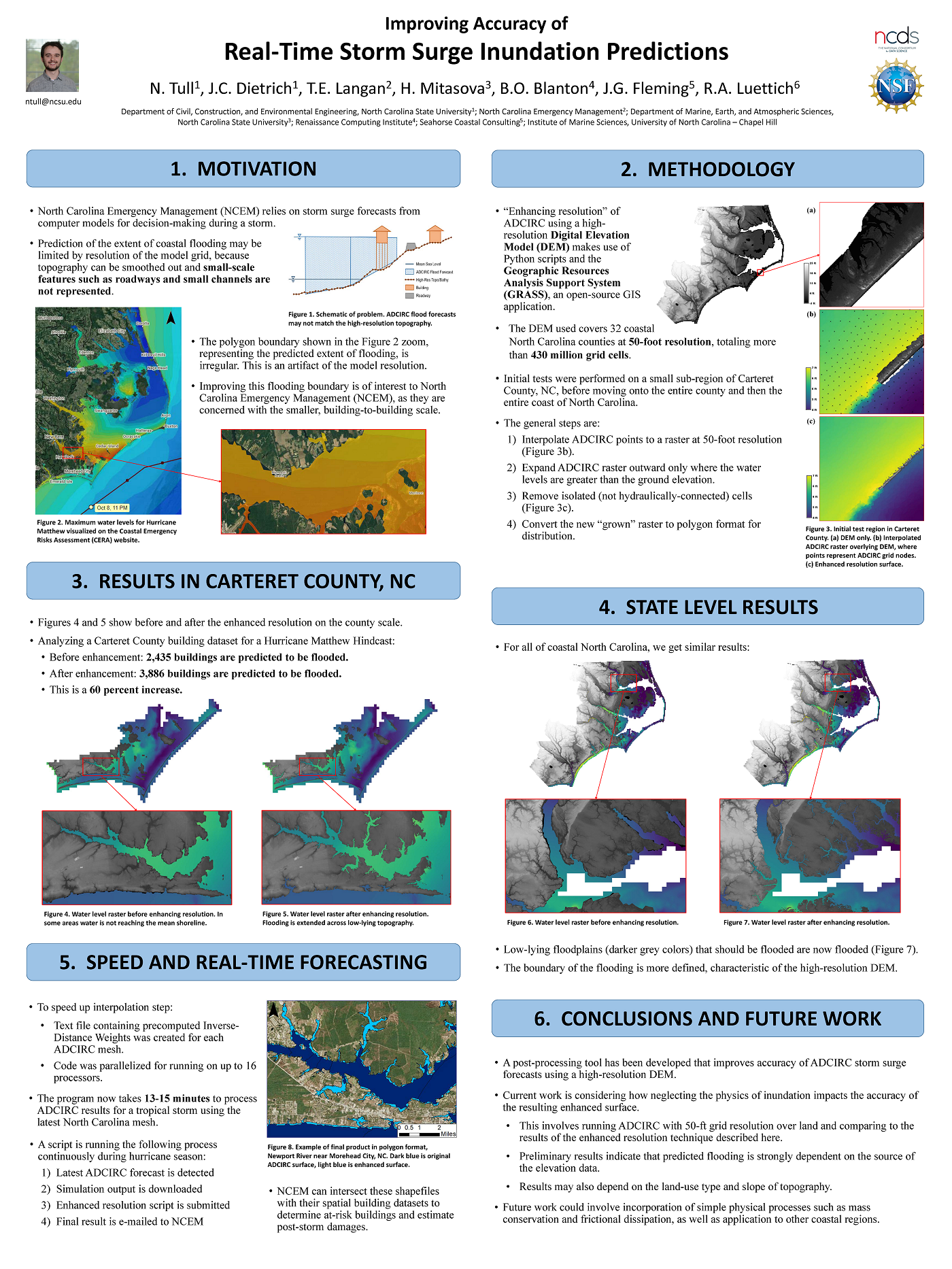