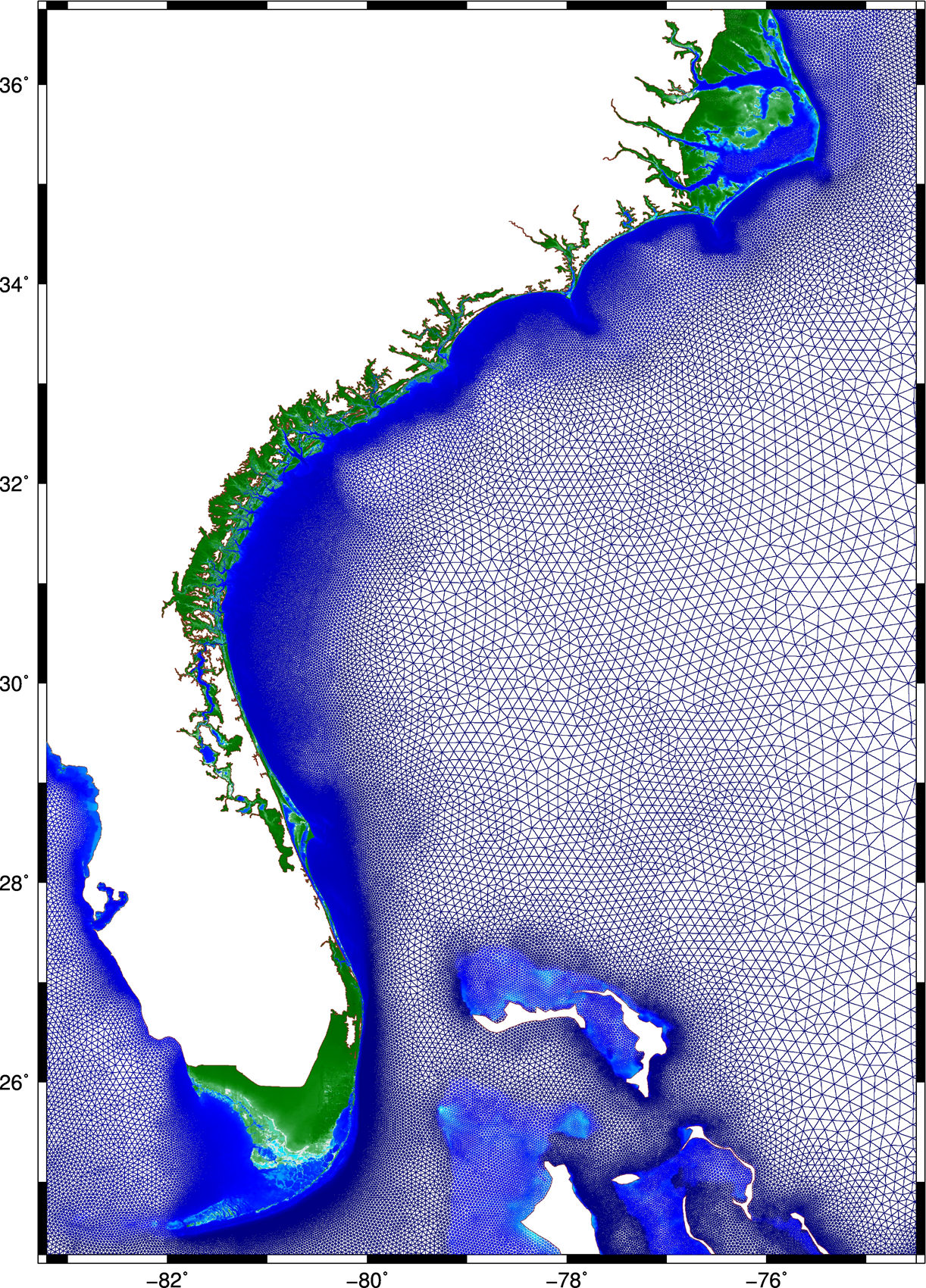 This research describes a method to improve the accuracy and efficiency of coastal flooding predictions. First, an existing model is used to explore the effect of storm forward speed and timing on tides and storm surge during Hurricane Matthew (2016). It is hypothesized that the spatial variability of Matthew’s effects on total water levels is due to the surge interacting nonlinearly with tides. If the storm occurred a few hours earlier or later, then the largest surges would have been shifted to other regions of the U.S. southeast coast. A change in forward speed of the storm also should alter its associated flooding due to differences in the duration over which the storm impacts the coastal waters. If the storm had moved faster, then the peak water levels would have increased along the coast, but the overall volume of inundation would have decreased. Then this research explores ways to increase the model’s accuracy and efficiency. To better represent Matthew’s effects, a mesh with detailed coverage of the coastal regions from Florida to North Carolina was developed by combining regional meshes originally developed for floodplain mapping. Compared to predictions using the earlier model, the new mesh allows for simulations of inundation that better match to observations especially inland.

Then, to best utilize this new mesh, a multi-resolution approach is implemented to use meshes of varying resolution when and where it is required. It is hypothesized that by `switching’ from coarse- to fine-resolution meshes, with the resolution in the fine mesh concentrated only at specific coastal regions influenced by the storm at that point in time, both accuracy and computational gains can be achieved. As the storm approaches the coastline and the landfall location becomes more certain, the simulation will switch to a fine-resolution mesh that describes the coastal features in that region. Application of the approach during Hurricanes Matthew and Florence revealed the predictions to improve in both accuracy and efficiency, as compared to that from single simulations on coarse- and fine-resolution meshes, respectively.

Finally, the efficiency of the approach is further improved in the case of Hurricane Matthew, by using multiple smaller fine-resolution meshes instead of a single high-resolution mesh for the entire U.S. southeast coast. Simulations are performed utilizing predicted values of water levels, wind speeds, and wave heights, as triggers to switch from one mesh to another. Results indicate how to achieve an optimum balance between accuracy and efficiency, by using the above-mentioned triggers, and through a careful selection of the combination meshes to be used in the approach. This research has the potential to improve the storm surge forecasting process. These gains in efficiency are directly a savings in wall-clock time, which can translate into more time to invest in better models and/or more time for the stakeholders to consider the forecast guidance.

A Thomas (2020). “Using a Multi-Resolution Approach to Improve the Accuracy and Eficiency of Flooding Predictions,” North Carolina State University.

Again because of the pandemic, we gathered virtually for a successful PhD defense by Ajimon Thomas. Most attendees joined online, and Ajimon shared his research with his fellow students and faculty committee. Congrats to Ajimon! 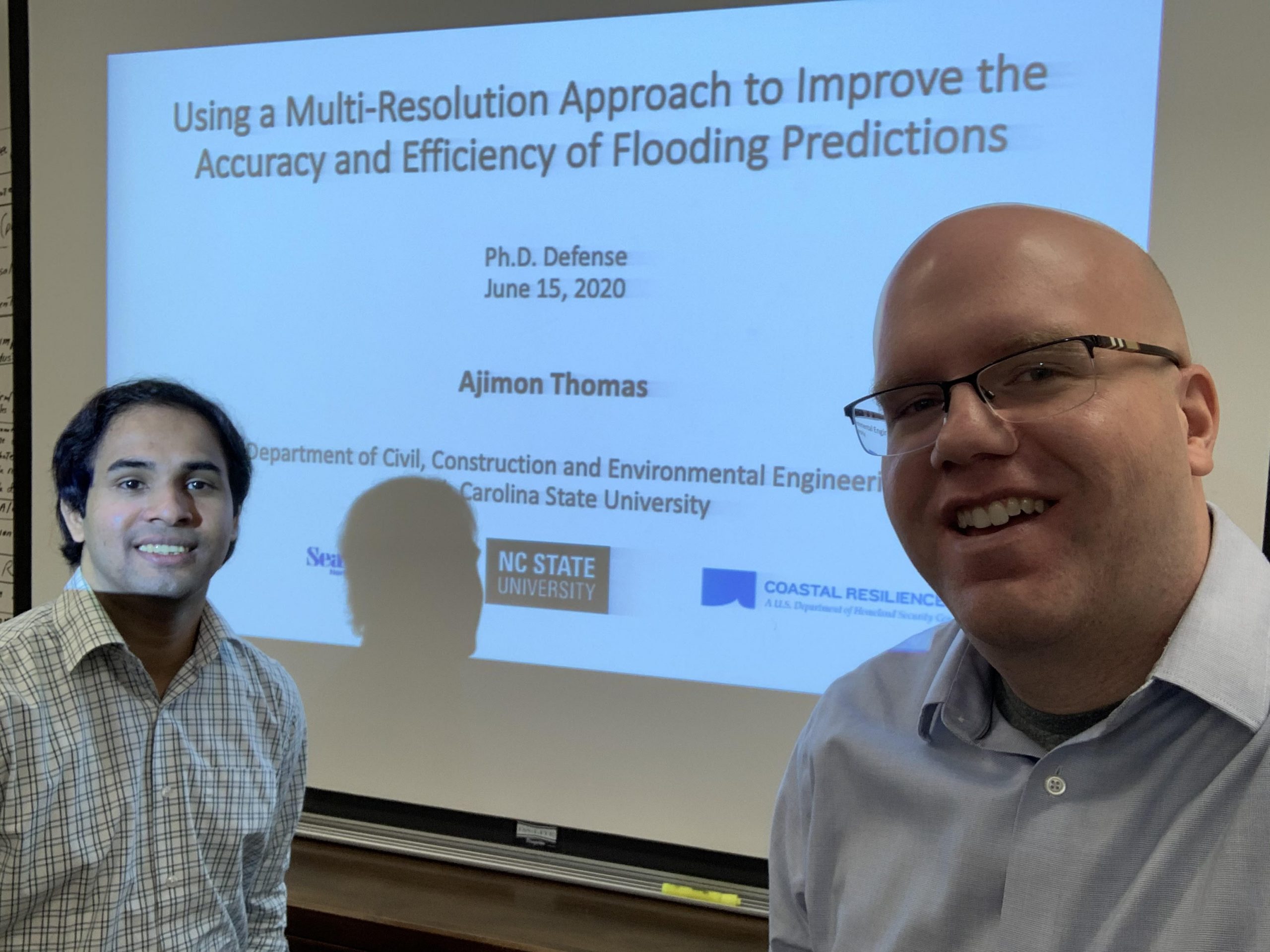 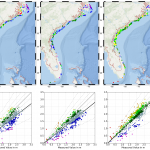 Ajimon Thomas. “Using a Multi-Resolution Approach to Improve the Accuracy and Efficiency of Flooding Predictions.” Department of Civil, Construction and Environmental Engineering, North Carolina State University, Raleigh, North Carolina, 27 November 2018.
Mechanistic models with high spatial resolution are useful tools to represent the dynamic and non-linear feedbacks between tides, winds and freshwater inflows in the nearshore and to predict future conditions. In this thesis, several aspects of the wind-and river-plume-driven hydrodynamics and transport in estuarine systems are examined through barotropic and baroclinic models.

The study begins with an application of a state-of-the-art storm surge model to examine the effects of meteorological forecast errors on coastal flooding predictions along the North Carolina (NC) coastline. As Hurricane Arthur (2014) moved over Pamlico Sound, it increased the total water levels to 2.5 m above sea level; this water pushed first into the river estuaries and against the inner banks, and then moved eastward to threaten the sound-side of the barrier islands. It is hypothesized that a combination of storm track and intensity errors caused errors in the forecast winds and water levels along the NC coast during Arthur. Model results reveal that, as the forecast storm track and intensity errors increase, the errors in forecast wind speeds also increase, but the errors in forecast water levels remain relatively the same, signifying the non-linear response of the coastal ocean to wind effects. By separating the forecast errors in storm track and storm strength, this study quantifies their effects on the coastal ocean, which provides useful guidance for designing relevant forecast ensembles.

In addition to flooding impacts, storms can also cause dramatic changes in estuarine salinities, which can negatively impact estuarine ecosystems. Baroclinic models are useful tools for predicting estuarine salinity response under changing environmental conditions. In the present work, the features of wind- and plume-driven circulation in the vicinity of Choctawhatchee Bay (CB) and Destin Inlet, Florida, are analyzed with a recently-enhanced, three-dimensional, baroclinic model. Satellite imagery showed a visible brackish surface plume at Destin during low tide. The goal of the present study is to quantify variability in the plume signature due to changes in tidal and wind forcing. Modeled tides, salinities and plume signature are validated against in-situ observations and satellite imagery and then applied to analyze plume response in two scenarios. In the first case, model plume behavior is analyzed on successive days of near-constant tidal amplitudes and changing wind directions due to passing cold fronts. In the second case, plume response is investigated during consecutive days of neap-spring variability in the tides and near-constant wind speeds. Model results reveal a larger plume during spring tides and periods of weak wind forcing. Oshore winds enhance the north-south expansion of the plume, whereas onshore winds restrict the plume to the coastline.

Finally, the validated model is applied to identify salinity and transport characteristics within CB. Based on past studies, it is hypothesized that CB is a stratified system with limited flushing and zones of distinct salinity gradients. These hypotheses are tested by analyzing bay salinities from the validated model during a period of low river flows. Model surface salinities indicate brackish conditions (20 psu) throughout the bay except for near the river mouth. Stratification (10 to 15 psu) within the bay is unaffected by the passage of cold fronts and neap-spring tidal variability. The residence time within the Choctawhatchee Bay, an important indicator of estuarine health, is computed via particle tracking and is equal to roughly 40 days.

This work advances the scientific understanding of multiple aspects of estuarine circulation including wind-driven surge and flooding, brackish plume behavior through inlets and onto the shelf, and salinity transport and stratication properties within estuaries. Research ndings lead to a better understanding of estuarine response under a wide range of atmospheric conditions, and the resulting technologies will be useful for oil spill response operations, fisheries and pollution management. 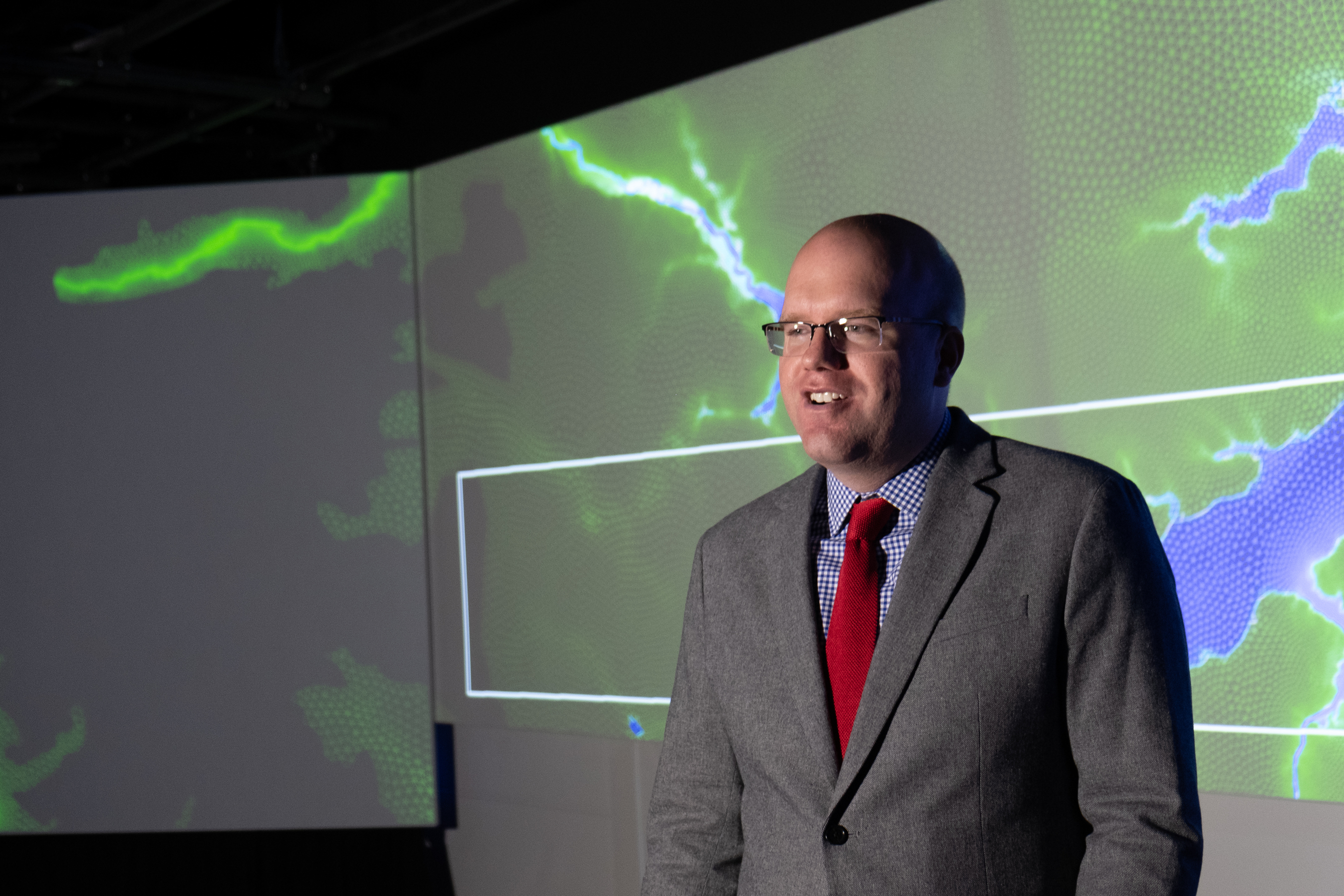 This seminar was part of the NCSU Libraries’ Coffee & Viz event series, and it was held in the Teaching and Visualization Lab. This lab has 10 overhead projectors and can display graphics on three walls — the entire front and both full sides of the room. More photos are included below.