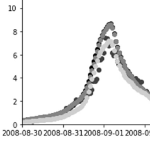 Hurricane Katrina was historic in magnitude. From ref. 1: “The large size of Katrina throughout its history, combined with the extreme waves generated during its most intense phase, enabled this storm to produce the largest storm surges (reliable observations up to 28 ft) that have ever been observed within the Gulf of Mexico, as determined from analyses of historical records.” The analysis by Grinsted et al. of the effects of rising temperatures on the frequency of Atlantic hurricane surge invokes “events of Katrina magnitude” as a standard by which other events are judged. However, we believe the Katrina benchmark, as used, is seriously flawed, in large part because the tide gauge spatial resolution used was so coarse that none of the locations forming the index ever experienced a true surge event of Katrina magnitude. This casts doubt on the claim that Katrina-level surge events may occur many times per decade by the late 21st century.