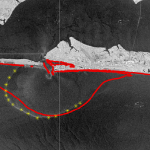 Multiple river-dominated estuaries line the northern Gulf coast and introduce substantial density variations. Their plumes have been shown to be highly sensitive to wind and tide effects, but in studies with limited observations and idealized wind forcing. This study explores these effects with a dynamic model that can represent the full behavior from river through estuary to shelf, and for a period with extensive observations. The inner shelf adjacent to Choctawhatchee Bay, a micro tidal estuary situated along the Florida Panhandle, is subject to buoyant, brackish outflows during the ebb-phase of the tidal cycle.

In December 2013, experiments were performed in this region to study mechanisms that influence near-shore surface transport. Satellite imagery showed a visible brackish surface plume at Destin during low tide. The goal of the present study is to quantify variability in the plume signature due to changes in tidal and wind forcing. Density-driven flows near Destin Inlet are modeled with the recently-enhanced, three-dimensional, baroclinic capabilities of the ADvanced CIRCulation (ADCIRC) model. Modeled tides, salinities and plume signature are validated against in-situ observations and satellite imagery. Model results reveal substantial changes in the length, width and orientation of the plume as the wind direction varied on consecutive days due to winter cold fronts. During a period of near-constant winds and variability in tidal amplitude, the model predicted a larger plume during spring tides than during neap conditions. Coriolis effects on the plume are minimized due to its small scale nature. Therefore, when the wind forcing is weak, the plume signature spreads radially from the inlet with slight preference to the down-shelf. The Choctawhatchee Bay plume is representative of other small-scale plumes formed in river-dominated and micro-tidal environments, and this work demonstrates the sensitivity of these plumes to changing environmental conditions.