The ADCIRC modeling system is used often to predict coastal flooding due to tropical cyclones and other storms. The model uses high resolution to represent the coastal environment, including flow pathways (inlets, man-made channels, rivers) and hydraulic controls (barrier islands, raised features). However, due to the use of large domains to represent hazards on coastlines in an entire state or multiple states, the highest resolution is typically about 20 to 50 m in coastal regions. Thus, there is a potential gap between the flooding predictions and the true flooding extents. We have developed a geospatial software to downscale the flooding extents to higher resolution. 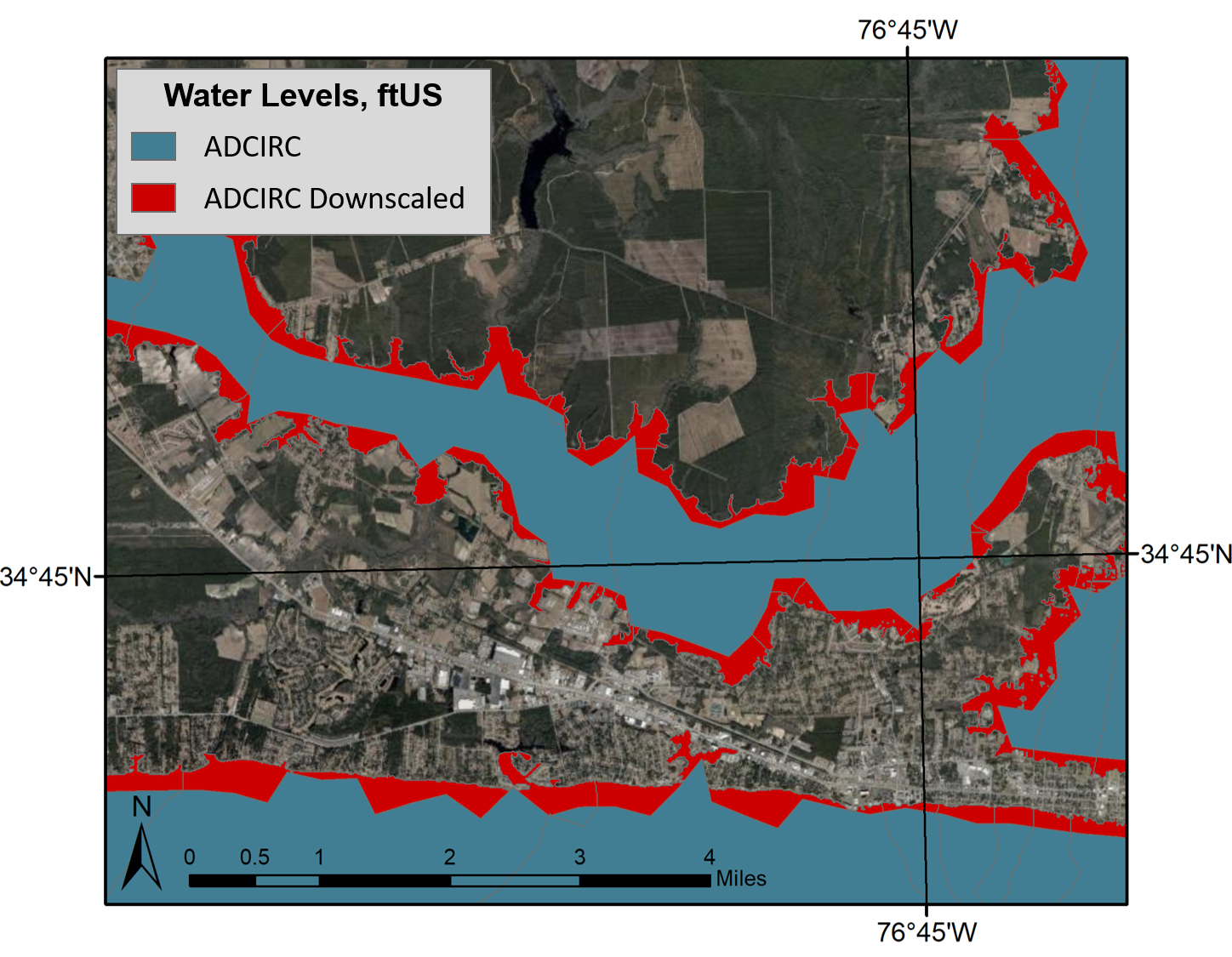 The following documentation is for downscaling the flooding predictions by using Kalpana. This software was created originally to view ADCIRC outputs as either ESRI shapefiles or KML files (for viewing in Google Earth). ADCIRC (the ADvanced CIRCulation model) uses finite element methods to predict water levels throughout the modeled domain. Although this model is able to provide accurate predictions in a matter of minutes, these predictions have a limited resolution and are not able to provide information at the scale of buildings, roadways, and other critical infrastructure.

This addition to Kalpana is able to predict water levels and flooding extents at the scale of critical infrastructure by downscaling water levels to a DEM (digital elevation model) with a finer resolution. To achieve this, Kalpana uses GRASS GIS and a DEM chosen by the user to horizontally extrapolate the ADCIRC predicted water elevations until an equivalent or greater DEM elevation is reached (shown in the figure below). The primary operation executed in this code for extrapolation is a GRASS module called r.grow, where “r” indicates a raster operation. Therefore any allusion to growth in this documentation such as “r.grow” or “--grow" is referring to the water level downscaling process.

In order to execute the r.grow extrapolation process, a GRASS location must first be created using the --createlocation option and a DEM of choice. A GRASS location is required for any operations done in GRASS GIS because it contains all of the necessary data (rasters, vectors, etc.) as well as the appropriate datum information for the given data. A great place to download DEMs in the United States is USGS TNM: https://viewer.nationalmap.gov/basic/. If using this website, it is recommended to download elevation products (3DEP) with 1/3 arc-second resolutions; this option is available for the entire United States.

Any DEMs used to create a GRASS location must use a datum with state plane coordinates because the code cannot be executed properly if units are in degrees (lon/lat). If the user is certain the DEM uses state plane coordinates and contains the desired resolution, specify --createmethod existing (shown below) to create a GRASS location based on the existing datum of the DEM. If unsure whether the DEM uses the correct datum or the DEM does not use the correct datum, use the --epsg option to automatically convert the data to a correct state plane coordinate system of choice. The correct EPSG code varies depending on region (typically different state-to-state in the US) and can be found using the following website: http://spatialreference.org/ref/.

Below are examples of correctly used --createlocation options. To mimic these examples, download the following two DEM rasters from USGS TNM:

For these examples, all accompanying files included in each zip folder can be erased other than the folders containing each DEM (folders grdn35w077_13 and grdn35w078_13).

These two DEMs were chosen to use in Kalpana examples for multiple reasons. First, during construction of the r.grow extrapolation code, testing was hard-wired to a North Carolina DEM, and the code was later manipulated to accommodate for any location. Therefore, the two chosen DEMs (located within and around Cape Lookout, NC) are well-tested and will provide accurate results. Second, USGS 1/3 arc-second (approximately 30 ft) resolution DEMs are chosen because this type of DEM is accessible to the public, and USGS provides coverage for 1/3 arc-second data throughout the entire United States. Last, since these DEMs do not contain the correct datum for use with r.grow, this allows the user to practice choosing a correct EPSG code to convert to the correct datum. These DEMs use a datum which contains units of latitude and longitude, rather than state plane coordinates (feet or meters). Additionally, the DEMs use vertical units of meters, but the examples use water elevations in feet. This requires the user to utilize an option that automatically converts vertical units from meters to feet.

For reference, the full patched DEM (including both the n35w077 and n35w078 DEMs) is pictured below: 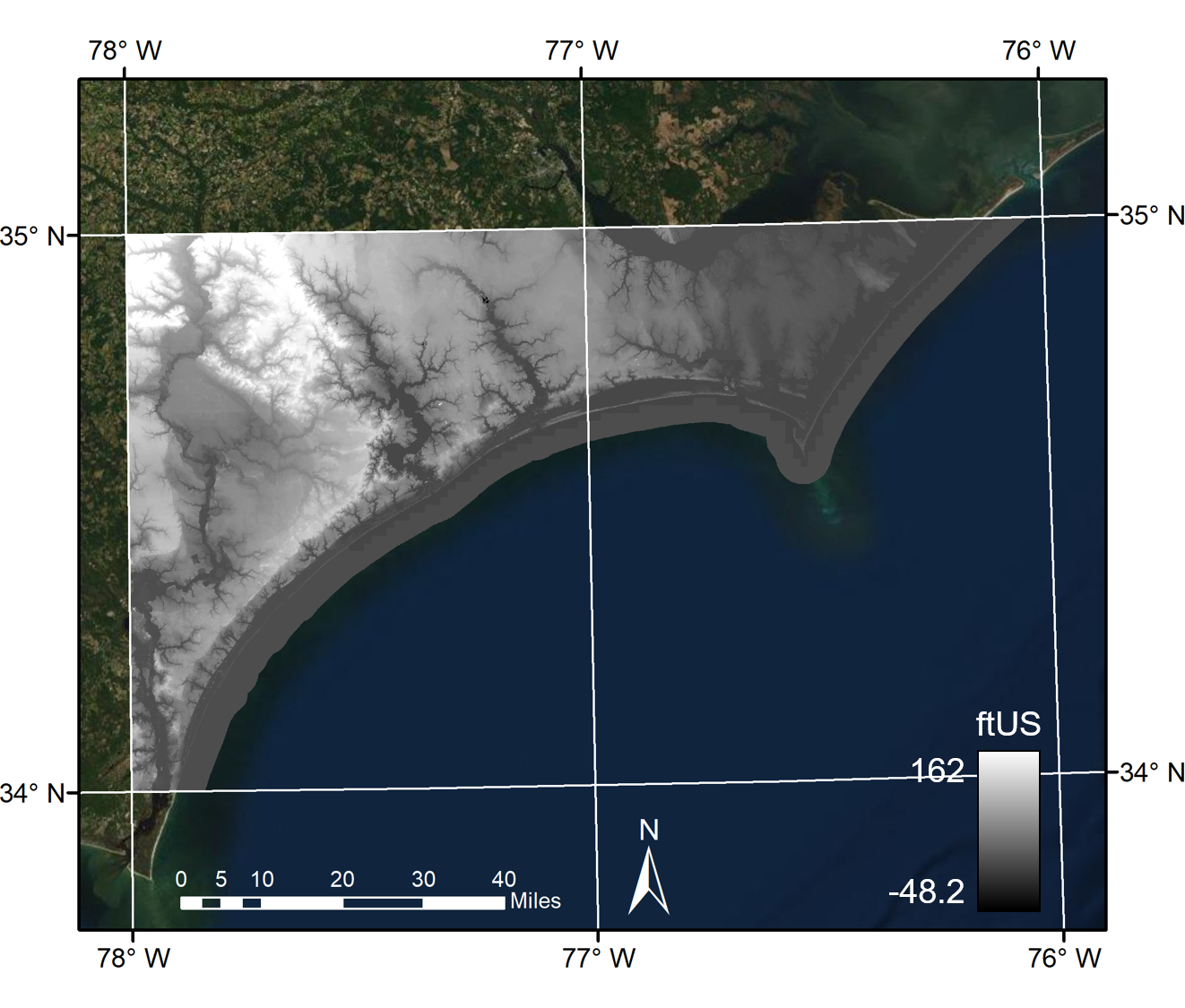 Before starting with these examples, make sure the current working directory contains all of the necessary files. The current working directory should contain kalpana.py, the two folders containing raster data (grdn35w077_13 and grdn35w078_13), and a job script (if desired). Further explanations for each of the available options are provided in table 1 below. Each example includes a vertical unit conversion of meters to feet using the --vunitconv option.

Create a location using one raster with a specified resolution of 50 ft and a specified EPSG code of 2264. Estimated time required for completion: 90 seconds. 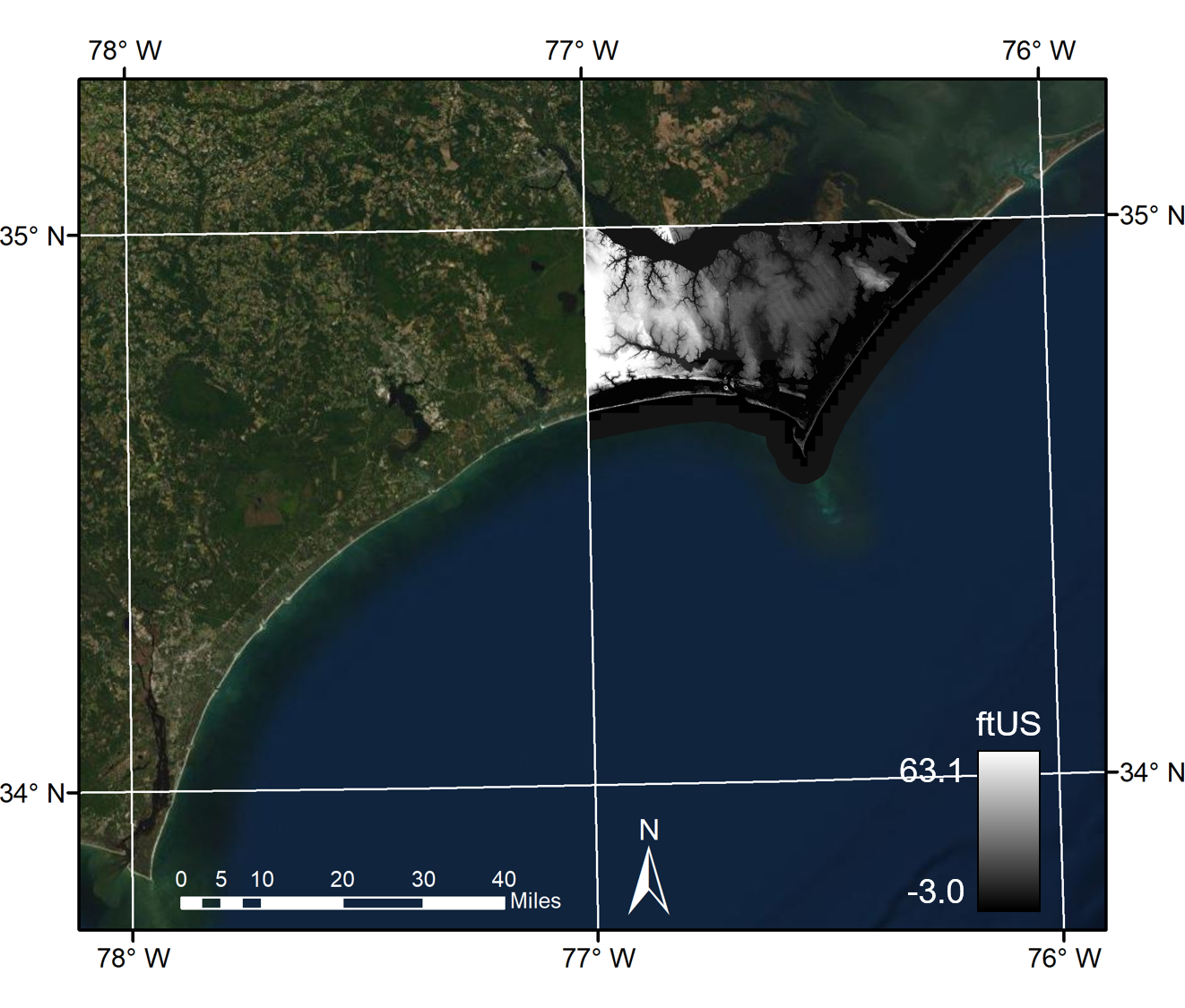 Single n35w077 DEM raster. This DEM is used for examples 1-3, while examples 4-6 use the full patched raster shown in the previous figure.

Create allocation using one raster, keeping the raster’s original resolution, and using a specified EPSG code of 2264. This example requires about 180 seconds to complete using the example rasters, because these rasters use a resolution finer than 50 ft.

Create a location using one raster, keeping its original datum and resolution. This method only requires about 10 seconds for completion, but should be used with caution. As seen in this example, the input raster contains data in latitude and longitude, making it unable to be used with r.grow if --createmethod existing is specified.

Create a location using two rasters with a specified resolution of 50 ft and a specified EPSG code of 2264. Estimated time required for completion: 200 seconds.

Create a location using two rasters, keeping the rasters’ original resolution, and using a specified EPSG code of 2264. When using multiple rasters with the align option, the resolution used is equal to the first listed resolution. This example requires about 380 seconds to complete using the example rasters because these rasters use a resolution finer than 50 ft and multiple rasters are being used.

Create a location using two rasters, keeping the original datum and resolution. This option also uses the resolution and datum of the first listed raster. This method only requires about 60 seconds for completion, but should be used with caution. As seen in this example, the input raster contains data in latitude and longitude, making it unable to be used with r.grow if --createmethod existing is specified.

After --createlocation is executed, there will be a file called GRASS_LOCATION.zip in the current working directory. To execute r.grow, the current working directory must contain GRASS_LOCATION.zip, GRASS_LOCATION_wgs84.zip, kalpana.py, and the appropriate maxele.63.nc file. The --grow option has required inputs of: --storm (enter the storm name), --filetype (typically maxele.63.nc), --contourrange (“[min] [max] [step]”), and --units (english or metric) with optional inputs including: --grownoutput, --growmethod, --growradius, --flooddepth, and --grownfiletype (all documented in table 2 below).

Before starting with these examples, make sure the current working directory contains all of the necessary files. The current working directory should contain kalpana.py, GRASS_LOCATION.zip (created using --createlocation), maxele.63.nc (or other filetype), GRASS_LOCATION_wgs84.zip (which can be downloaded from the GitHub portal), and a job script (if desired). The following examples all use the GRASS location created in Example 1, using only the n35w077 raster with a specified resolution of 50 ft and a specified EPSG code of 2264. Each example requires about 90 seconds for completion.

A sample maxele.63.nc file can be downloaded and unzipped using this link. This file contains ADCIRC outputs for the maximum water levels occurring throughout the duration of advisory 48 of Hurricane Florence (2018) using a segmented portion of an HSOFS (Hurricane Surge On-Demand Forecast System) mesh. This mesh was developed by NOAA for use in the NSEM (Named Storm Event Model) to make storm predictions throughout the eastern portion of the United States. Advisory 48 was one of the more severe advisories for coastal North Carolina, so users are able to visualize more extreme water levels and further r.grow extrapolation extents. Further explanations for each of the r.grow options are provided in Table 2 below.

Operate r.grow using the required inputs (--storm, --filetype, --contourrange, --units) as well as the default settings for the optional inputs (--grownoutput, --growmethod, --growradius, --floddepth, --grownfiletype). As shown in the subsequent examples, since these optional inputs are all set to their default values in the current example, leaving out these options will result in the same operation. 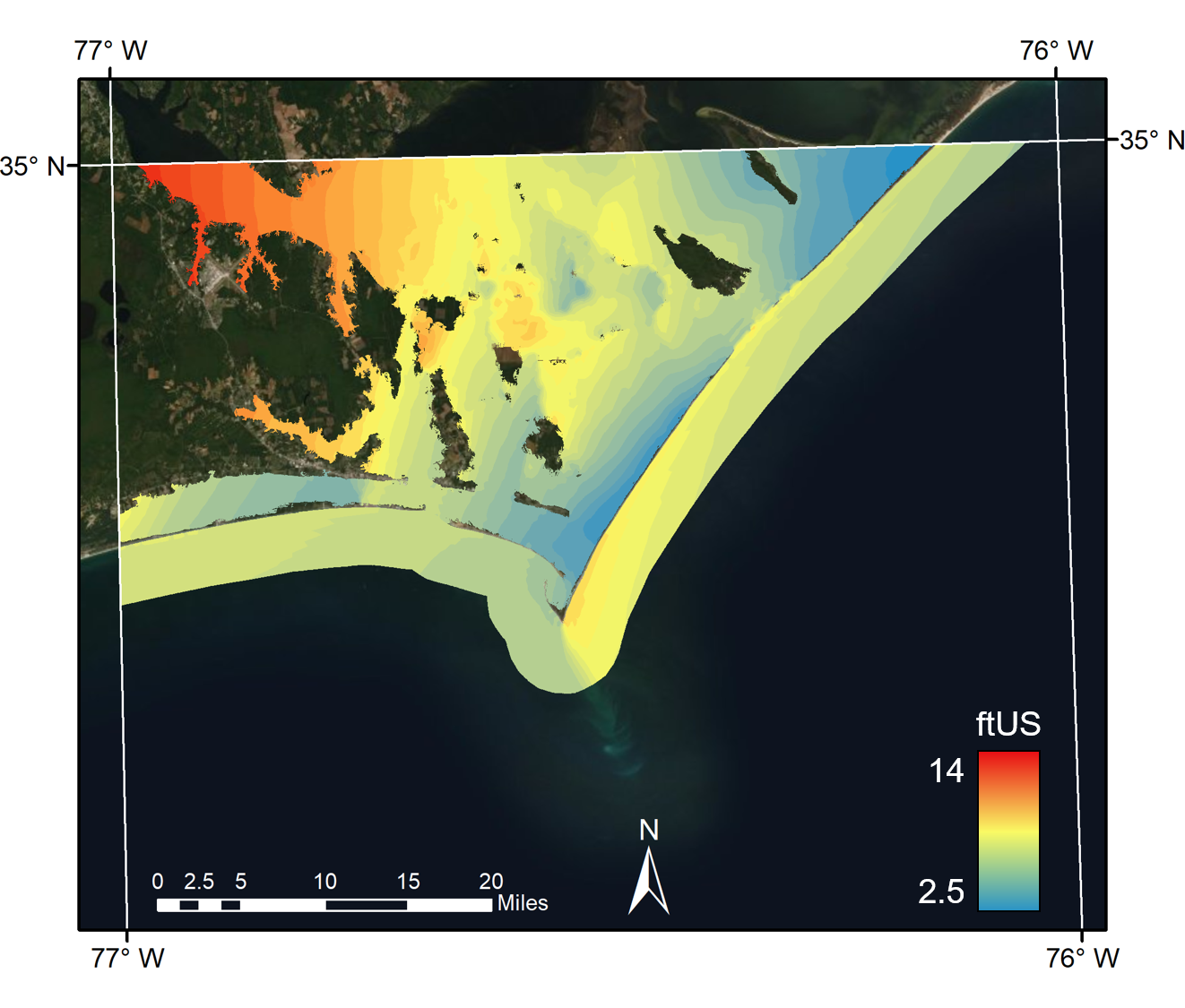 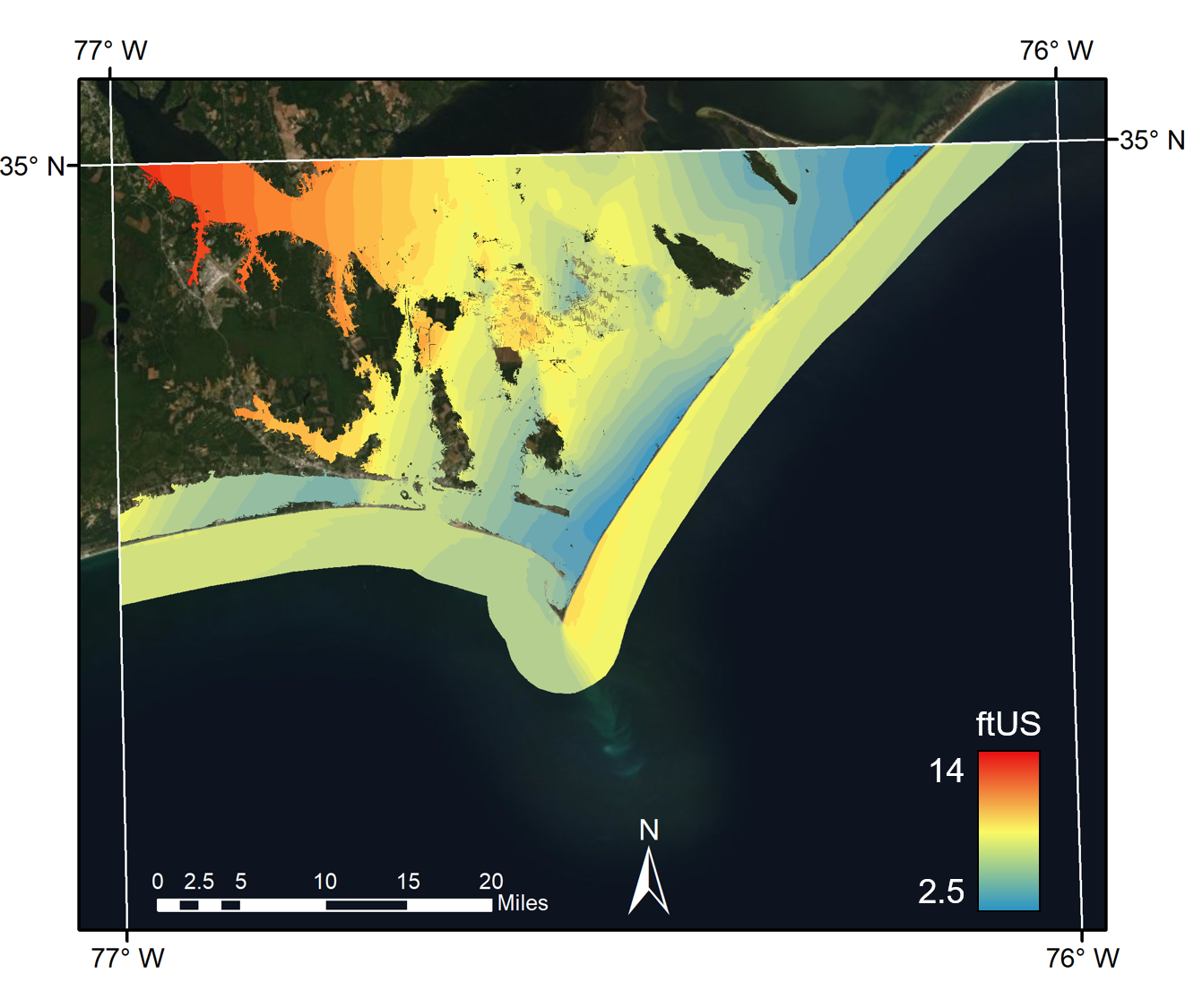 Downscaled water levels using the subtraciton method. Only subtle differences can be seen in comparison to the defaults example for this particular storm advisory.

Operate r.grow using an increased radius of 60 cells, with all other optional values set to default. The radius is used to limit the extent of growth due to horizontal extrapolation where the water is not fully stopped by the DEM elevation. The radius is in units of cells, so for instance a radius of 30 with a raster cell resolution of 50 ft will allow for a maximum horizontal growth of 1500 ft away from the original ADCIRC water levels. The grow radius check can be bypassed by using the option --growradius none. This will reduce computational time, but the maximum extents of extrapolation will only be limited by the DEM. The recommended radius value for North Carolina is set to the default, 30.01. 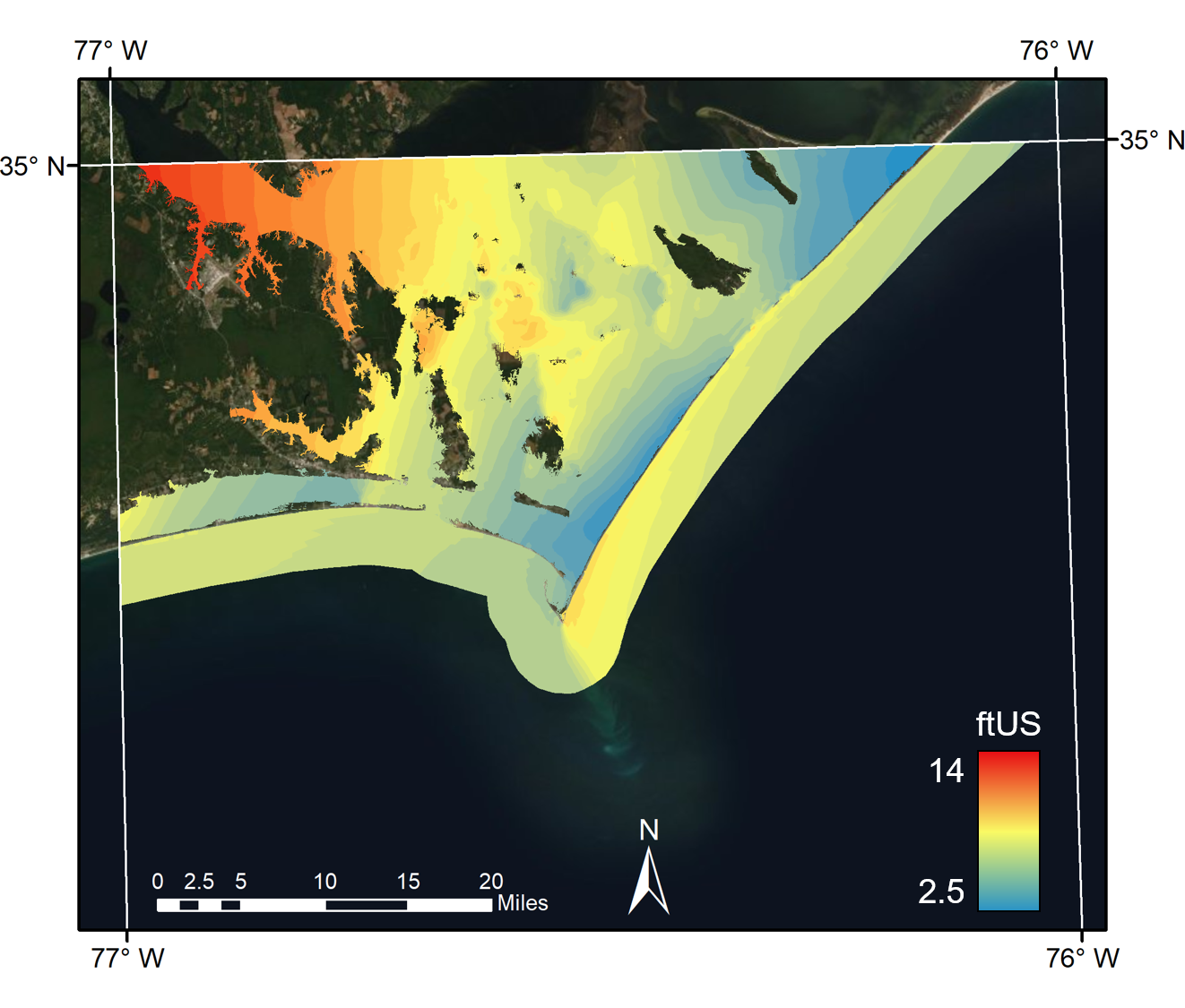 Downscaled water levels using an increased grow radius of 60.01. Notice that this example is grown further horizontally in some areas as compared to the previous two examples.

Operate r.grow and visualize results as flood inundation depths, rather than flood elevations, with all other optional values set to default. This option simply takes all of the flood elevations covering any terrestrial DEM areas and subtracts the DEM value, resulting in flood depth. These data are visualized as a raster rather than polygons because, even if binning occurs, there are still too many unique polygons. This will cause creating and exporting a polygon to actually take longer than just exporting a raster.

NOTE: GRASS GIS sometimes has issues exporting the color table of this image, creating an error message and causing the output TIFF to contain outliers which throw off the coloring. A simple solution to this issue is to perform a raster calculation using the Raster Calculator in ArcMap. An example equation could be:

This will remove all values below 0 ft and above 50 ft elevation and set the color table to the remaining minimum and maximum raster values. 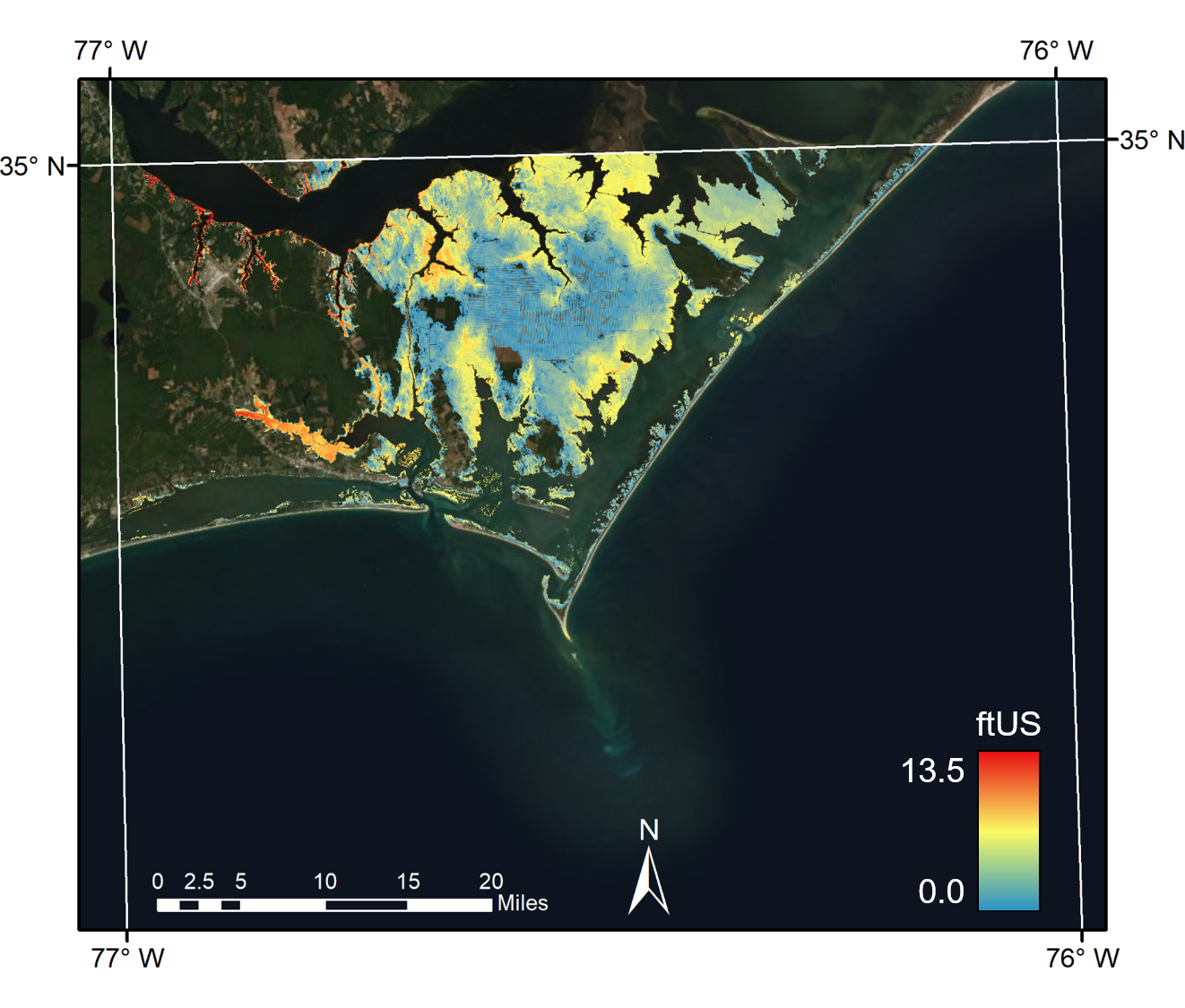 Inundated flood depths example. These values are generated by subtracting the DEM elevation from the water elevation in areas where the DEM has a value greater than zero (i.e. sub-aerial DEM only).

Operate r.grow and visualize flood elevations as KML by changing –grownfiletype, with all other optional values set to default.

NOTE: While these formats are supported by GRASS, these filetypes have been tested with Kalpana only for ESRI Shapefiles and KML files. We recreate this table to show the other possibilities, but if another filetype is chosen, there is no guarantee that it will be supported by the Kalpana code.