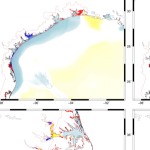 Storm surge and coastal flooding predictions can require high resolution of critical flow pathways and barriers, typically with simulations using grids/meshes with millions of cells/elements to represent a coastal region. However, the cost of this resolution can slow forecasts during a storm. To add resolution when and where it is needed, previous studies have used adaptive mesh methods, which update resolution at single or multiple cells but which require hierarchies of and thresholds for refinement, and nesting methods, which update resolution at subdomains but which require additional simulations. This research proposes a middle way, in which predictions from a coarse mesh are mapped, mid-simulation, onto a fine mesh with increased resolution near the storm’s projected landfall location. The coarse and fine meshes are pre-developed, thus removing any refinement decisions during the simulation, the solution mapping uses a widely used framework, thus enabling an efficient interpolation, and the same simulation is continued, thus eliminating a separate full-domain simulation. For four historical storms, results show efficiency gains of up to 53 percent, with minimal accuracy losses relative to a static simulation.