Updated 2012/06/05: This version of FigureGen has become outdated, but is maintained on this page for reference. Please click here to be redirected to the newest version.

FigureGen is a FORTRAN program that creates images for ADCIRC output files. It reads sparse (fort.63, fort.64, etc.) and full (maxele.63, maxwvel.63, etc.) output files, grid (fort.14, etc.) files, and nodal attributes (fort.13) files. It plots contours, contour lines, and vectors. Using FigureGen, you can go directly from the ADCIRC input and output files to a presentation-quality figure, for one or multiple time snaps, without having to use SMS.

The following example depicts the wind reduction factors for our hurricane runs in southeast Louisiana:

Directional wind reduction factors in the northern Gulf of Mexico.

This program started from a script written by Brian Blanton. I converted it to FORTRAN because I am more familiar with that language, and I added the capability to plot vectors, among other things. But, at its core, FigureGen behaves like a script, and it uses system calls to tell other software how to generate the figure(s).

NOTE TO EXISTING USERS: The latest version of FigureGen is not backward-compatible with input files for previous versions. I’m sorry, but I think the new format of the input file will be better going forward. You will need to update previous input files. I have provided examples using the new format below. 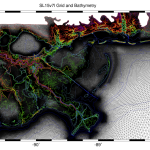 8. Grid and Colored Contour Lines of Bathy/Topo. Read an ADCIRC grid file and plot the grid itself. Add contours, and color them based on the bathymetry/topography itself. Note that this plot combines two new features. First, the grid is plotted by turning on the plot grid flag in the input file. The grid can be combined with the other options in FigureGen, including contours, contour lines, etc. 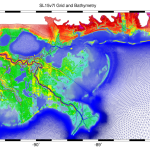 7. Grid with Bathy/Topo Coloring. Read an ADCIRC grid file and plot the grid itself. Instead of black lines, color the grid lines based on the bathymetry/topography. Note that we must combine several settings to produce this plot. The plot grid flag is activated, all of the contours are deactivated, the grid file is specified as the contour file, and the contour file format is set to GRID-BATH. 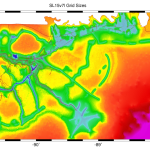 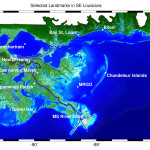 5. Bathy/Topo Contours with Labels of Landmarks. Read an ADCIRC grid file and plot contours of the bathymetry/topography. Then add labels as directed by an external file. Note that the labels are controlled by a line near the bottom of the input file. The user can specify the color and the file name of the labels. This external file contains the longitudes, latitudes, text sizes, rotation angles, font numbers (from GMT), justifications, and text. Note that the justification is a two-letter combination of Left/Center/Right and Top/Middle/Bottom. 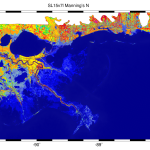 4. Manning’s n from the fort.13 File. Read the ADCIRC nodal attributes file and plot the Manning’s n values. Note that we specify the fort.13 file as the contour file, and we set the format to 13-MANNING. We can plot the wind reduction factors and canopy values using similar commands. 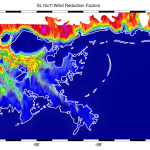 3. Wind Reduction Factors from the fort.13 File. Read the ADCIRC nodal attributes file and plot one or more columns of the wind reduction factors. Note that we specify the fort.13 file as the contour file, and we set the format to 13-WIND-REDUCTION-4. The last number in that string specifies the column to plot, so we are plotting the wind reduction factors from the fourth column (which corresponds to northward winds).

To plot all 12 columns, set the contour file format to 13-WIND-REDUCTION. Then you can use the ImageMagick command:

to create an animation like the image at the top of this page. Also note that we are adding a white coastline to the figure. This addition is controlled by a line near the bottom of the input file, and the user can select the color and specify the file name for the coastline. (However, any file containing lon,lat pairs could be visualized using this feature.) 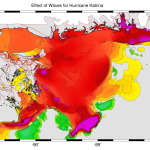 2. Difference Plots. Read ADCIRC files and plot contours of the differences between the two files. If the files have the same number of nodes, then this feature will work on output files, grid files (for bathymetry only), and fort.13 files. In this example, we plot the differences between the maximum water levels from a fully coupled simulation and a simulation without wave effects. 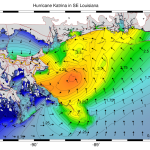 GMT is the software package that plots the contours, contour lines, etc and produces a PostScript file (*.ps) containing the figure. The GMT software package is actually a suite of executable programs, of which Figure Gen uses only seven. Thus, if you are running on a Windows machine, then you might be able to get away with downloading only the executable program. If that does not work, then you will need to download and install the GMT source code from the GMT Web site.

ImageMagick is the software package that actually converts the PostScript files by calling GhostScript. ImageMagick also performs some other actions on these files, such as rotating the image, removing any extra white space from the edge, and converting them to a specific resolution. For each time snap, FigureGen will output high-resolution (1200dpi) and low-resolution (width of 800 pixels) JPEG files. If you are running on Windows, then just download and install the executable program. If you are using a different system, then you will need to visit the ImageMagick Web site and obtain the installation files.

The FigureGen program requires a source file and accompanying input files. These files are linked here:

This is the source code itself. This code will ask the user for and then read an input file containing information about which files to plot and how. FigureGen will plot the contours of both elevation-type (fort.63, maxele.63, maxwvel.63, etc.) and velocity-type (fort.64, fort.74, etc.) files. You can specify a color palette to use by creating and saving a palette in SMS. You can convert units automatically. You can specify the lat/lon box to plot. And, perhaps most importantly, you can run FigureGen in parallel, so that you can create multiple images in a short amount of time. This source code contains directives for both serial and parallel compilation, and directions on how to compile are included below.

The input file contains all of the buttons and levers that you can adjust for your figures. You can change the lat/lon boundaries of the box; you can turn on/off the contours, contour lines, vectors, etc.; you can convert the units in the ADCIRC output files; you can create figures for several time snaps; you can control the appearance of the scale; etc. Example input files are linked above, in the “Examples Using Version 26” section.

You can control the colors in FigureGen by specifying the name of a color palette in the input file. This color palette was created and saved from SMS, and it is the palette that we use for our hindcast figures. If you wanted a different palette, then you can use SMS to create one, and then use FigureGen to apply it to figures.

As stated above, FigureGen is written so that the source file contains instructions for both serial and parallel implementations. For that reason, it may not be straight-forward to compile. In addition, I do not have much experience with the pre-processor directives that are necessary for this kind of dual-use programming, and thus I may not be able to answer questions about compiling. Here is what has worked for me:

The /fpp command tells the compiler to use the FORTRAN pre-processor, which deals with the directives that split the serial parts of the code from the parallel parts. I think most compilers use automatically the pre-processor when the source file has an extension with a capital letter (such as F90), but that is not the case with the Compaq Visual FORTRAN compiler. However, this compiler does name automatically the executable as FigureGen26.exe.

Now the compiler knows automatically to use the pre-processor, but we have to specify two other things. First, we need to include the library of Unix commands. The FigureGen program relies heavily on calls to the operating system, and these calls are not defined automatically by the Absoft FORTRAN compiler. Second, we need to specify the name of the executable by using the -o option.

That is all of the experience that I have in compiling FigureGen. It seems that the main difficulties are: (A) ensuring that the compiler uses its pre-processor to handle the compiler directives, (B) linking to the Unix library that contains the definitions for the system calls, (C) defining the flag to turn on the parallel commands in my source code, and/or (D) specifying the directory where the MPI library is located. If your experience is different, then please let me know.

In a serial implementation, running FigureGen is easy. Typing the name of the executable will start the program. It will ask the user for the name of the input file, which it will then read and process. From that point forward, the rest of the figure generation is automatic.

In a parallel implementation, I use the following steps. On our system, the command to run a parallel program on three processors is:

Note that I am being very specific about which processors I request. The first processor in the list will be the master in my master-slave paradigm. And, because FigureGen is interactive (by asking for the name of the input file), I always ask for processor 0 to be the master because that is the processor from which I perform the run. The rest of the processors will be the slaves, and they will make the figures. In the line above, I am requesting that processors 1 and 2 be the slaves. If I wanted to split the work amongst 10 processors, I might use a command like:

where now I am requesting that processors 21 through 30 be the slaves. The master will assign a time snap to each slave and then wait to hear back from the slaves. When a slave is finished generating a figure for the time snap it was assigned, then it will alert the master and receive a new time snap.

Before running FigureGen, it is important that the necessary files be located in the working directory. Specifically, the grid file, the file from which to plot contours (if used), the file from which to plot vectors (if used), and the color palette (if used) should be in the same folder as the FigureGen executable. In addition, you will need to create the temporary folder that is named in the input file. This is where FigureGen will create any temporary files as it works. You can run multiple instances of FigureGen from the same folder by specifying separate temporary folders for each instance. Thus, you might be generating Ele-Wind figures using a temporary folder called Temp1 at the same time that you are generating Wind-Wind figures using a temporary folder called Temp2.