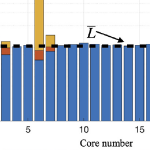 As coastal circulation models have evolved to predict storm-induced flooding, they must include progressively more overland regions that are normally dry, to where now it is possible for more than half of the domain to be needed in none or only some of the computations. While this evolution has improved real-time forecasting and long-term mitigation of coastal flooding, it poses a problem for parallelization in an HPC environment, especially for static paradigms in which the workload is balanced only at the start of the simulation. In this study, a dynamic rebalancing of computational work is developed for a finite-element-based, shallow-water, ocean circulation model of extensive overland flooding. The implementation has a low overhead cost, and we demonstrate a realistic hurricane-forced coastal flooding simulation can achieve peak speed-ups near 45% over the static case, thus operating now at 80−90% efficiency.